Jeff and Teresa started at Woodwork Manufacturing at the ages of 10 and 11, when their father was the General Manager.  They helped put Woodwork catalogs together, and get paid .01 per piece of paper.  Their payments per catalog were $1.50. From sweeping floors in the warehouse, emptying trashcans and answering phones, they started at the bottom of the corporate ladder.

After school and college, they came back to the business where they got their start. With guidance from their father, they learned the "tools of the trade'.

Over the years, Jeff and Teresa have seen how Woodwork Manufacturing has become a success story. The hard work, passion, and quality products have always been a staple of their family business.

"Dad is the hardest working, kindest most honest person I know, he has given everything to get Woodwork Manufacturing where it is today and Jeff and I want to continue that tradition.  We will continue to make Woodwork something we can all be proud of.  We continue to learn from mom and dad every day". - Teresa Schrock-Wagner 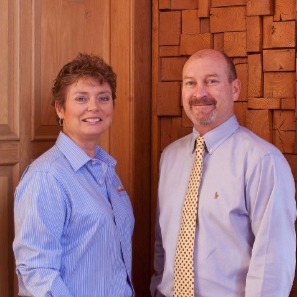 Passing Along the Torch - Jay Schrock

Jay Schrock's story with Woodwork Manufacturing starts more than 50 years ago. When he joined the company and worked his way up to eventual owner, he relied on faith, hard work and passion.  He says, "The one thing that I've always really tried to promote is that Woodwork Manufacturing always tries to give the best quality product and the most friendly service."

"I am not sure what the good Lord has in mind for me, but he's led me way beyond anything I could possibly imagine on my own"
- Jay Schrock

The Company motto was “If it can be made of wood, we can do it.”

The company operated as a planning mill & did custom millwork of all types, including the manufacture of all the wood items in the J.S. Dillon stores, which at the time included all of the wall display shelving, island shelving, check stands, water spray produce counters, wood interior décor, etc.

Sometime circa 1930, Woodwork moved to 16 West 4th Street into a new building built by the J. S. Dillon Company. It was built in the style of the Dillon stores of the time in the event they would want to use it as one of their retail outlets at some time. The old Hutchinson streetcar barns were then located just across 4th Street to the South. The Company still did Architectural Millwork and as it grew steadily, started to purchase the materials it needed (lumber, plywood, etc.) in rail car load quantities.

At the onset of World War 2, it became increasingly difficult to purchase the materials needed for production. This same problem was also proving a difficulty to A. M. Horrall, an entrepreneur from Tulsa, Oklahoma, who was engaged primarily in the construction of pipelines for the oil industry. While visiting with his friends Dwayne & Dwight Wallace, who headed up the Cessna Aircraft Co. of Wichita, he was asked by them if he would be interested in finding an organization to build the bulk of the different wood items that were part of the Cessna aircraft being built at the time. A short time later, Mr. Horrall appeared in the plant of Woodwork Mfg. Co., in Hutchinson and after looking over the operation for several hours, agreed with the two active partners at the time (B. F. Nichols and H. L. Steed) to form an aircraft component production company to be named Aircraft Woodwork Mfrs. Inc. This was circa 1942. 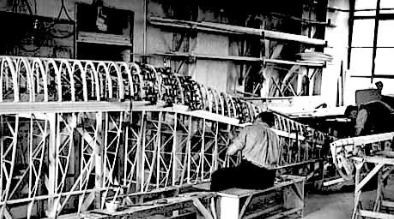 Aircraft Woodwork Mfrs. Inc. literally burgeoned from that date. Its first task was to provide several wood components for the CG-4A glider, including the nose section. The glider was a huge aircraft capable of carrying troops, howitzers, smaller trucks, etc.

As the wartime demand for airplanes grew, the CG-4A program was discontinued at Cessna, with all of the tooling etc. being shipped to the Timm Aircraft Co. in California, where production of the item was continued.

Cessna & Aircraft Woodwork then devoted their entire efforts to the production of the Cessna UC-78 “Bobcat” and its Canadian counterpart, the Canadian “Crane”. These were twin engine low wing aircraft, used as transitional trainers from single to multi engine ratings, and also as military personnel transports. Much of the aircraft was made of wood, built around a basic welded tubular framework.

Main offices were in the Wolcott Building. The huge pool of people available for employment came as a great part from women who had never worked outside the home, and men whose normal occupation had been disrupted by the war effort.

As the War wound down, the Bobcat and Crane, being primarily training aircraft as opposed to fighting and cargo aircraft, were discontinued fairly early.

After the war, Aircraft Woodwork Mfrs. Inc. again became Woodwork Mfg. Co. and slowly resumed its normal operations. H. A. Nichols and W. E. Kissick retired from the firm and H. L. Steed passed away in 1947, leaving B.F. Nichols and C. L. Steed as partners in the business. During the following years, the firm grew steadily, carrying on its manufacturing operations, expanding them to include store and bank fixtures, and architectural millwork for new schools, hospitals, churches, etc. A large materials supply operation was added, and the name changed to Woodwork Manufacturing & Supply. This operation occupied 9 buildings in the West Fourth vicinity, warehousing and selling all types of hardwood lumber, plywood’s, windows, doors, molding’s and trim. Still later, a large builder’s contract hardware section was added, allowing the firm to furnish all of the hardware on all types of new construction along with the millwork requirements. From Hutchinson to the Western part of the state was the territory primarily serviced by these operations.

On August 1, 1973, B. F. Nichols and C. L. Steed decided that they would like to retire and the business was sold to Dick Currie who owned and operated Architectural Millwork, Inc. Both companies continued to carry on their roles and Woodwork Mfg. & Supply became known as a Division of Architectural Millwork.

In 1978 Dick Currie decided to consolidate his two Companies, Architectural Millwork and Woodwork Mfg. & Supply, to one location and broke ground on their new 117,000 SF facility located at 401 S. Adams in Hutchinson, Ks. The General Contractor was Ewing Construction. Construction was completed in 1979. This was a new State of the Art facility that combined Warehouse space, Manufacturing Space and Corporate Offices all under one roof at a cost of $1,600,000 for plant and equipment. The project was financed through an Industrial Revenue Bond.

Woodwork Mfg. & Supply primarily handled the Residential market for Windows, Pre-hung Doors, trim, stair parts and Hardware and its primary role became distributor of building products. In 1981 Woodwork opened a second showroom and office in Tulsa, Oklahoma to expand its market and used an outside sales force to call on Residential Contractors. Woodwork later closed its Tulsa office in the spring of 1990 as the oil market and economy crashed.

On February 1, 1983 Dick Currie sold off the Division of Woodwork Mfg. & Supply to E. Jay Schrock who moved the Company to the old Merchant Warehouse which was originally used as a distribution center for local Grocery stores, (Dillons, Safeway & Mammels) it later was used by Kamen Supply  who sold plumbing fixtures. This Warehouse was located at 320 S. Washington, just one block east of Architectural Millwork. At the time of the change in ownership Woodwork had a non-compete with Architectural Millwork, Inc. and had agreed to continue buying all of its moldings from AMI for a period of 7 years, but could continue to Pre-hang its own doors and sell to the Residential Market. Woodwork used the main floor for office space and a small show room and the rest of the 1st level was Warehouse space that was filled with racks of door and trim inventory. A door machine and pre-hanging department was also on the 1st level. You could get to the 2nd level by using a freight elevator or stairs and that is where the window inventory was kept and where the window units were mulled together before shipping out to a job site.

E. Jay Schrock had started working for Woodwork on March 2, 1960 as a truck driver making deliveries. At that time Woodwork was located on 16 west 4th Street. E. Jay Schrock had worked in all aspects of the business at Woodwork and by the time Dick Currie bought the company in 1973, he had named Mr. Schrock the General Manager of the Company. So, it was a natural fit when Mr. Currie had offered to sell the Woodwork Mfg. & Supply Division to E. Jay Schrock.

In September of 1989, Woodwork Mfg. & Supply had purchased the buildings at 309 & 311 S. Washington and got back into the business of manufacturing custom hardwood moldings and keeping a large inventory of hardwood lumber. Woodwork had Salesman that lived in Hays, Pratt, Hutchinson, Wichita and Manhattan. This sales team called on General Contractors throughout the state and parts of Oklahoma.

Woodwork continued to expand its product line by adding Hollow Metal Doors and frames in 1996 and put this operation and other inventory in building at 313,315,317 & 319 S. Main. As the company grew it once again became spread out in several different buildings and was looking for ways to increase efficiencies. E. Jay Schrock and his son Jeff P. Schrock, who joined the company in 1988, had started looking for a new home which would allow consolidation of all its operations. On October 18, 1999 Woodwork was able to purchase the building it had moved from just 16 years earlier at 401 S. Adams. Woodwork was now back in the 117,000 SF facility and was able to consolidate all of its operations under one roof.

In 2015 E. Jay Schrock decided it was time to hand over the reins of the Company to his two Children Jeff P. Schrock & Teresa J. Schrock-Wagner and on March 31, 2016 after dedicating the last 56 years of his life to Woodwork Mfg. & Supply E. Jay Schrock had officially retired as President. He still serves on the Board of Directors & his Leadership will forever be an important part of the Woodwork Legacy as those that came before him.

For more than 90 years Woodwork Mfg. & Supply, Inc. has been a fixture in the Hutchinson Business Community and is proud of the great many dedicated employees that have been a part of providing quality wood products for homes and buildings all across the state of Kansas and today as far away as the Hawaiian Islands.